XRF Digital are proud to sponsor the Paul Wood Racing Team, we always look forward to hearing from him for an update on the races he has been involved in over the weekends.  Here is Pauls latest update following on from the 6 hour Birkett Relay race run by the 750 Motor Club at Silverstone. 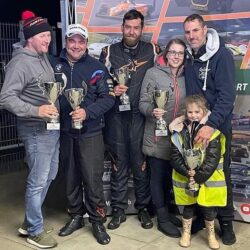 On Saturday 23rd October I joined forces with Russell Dack and Bryan Branson to tackle the 6 hour Birkett Relay race run by the 750 Motor Club at Silverstone on the Grand Prix circuit with 69 other teams.

The event is really two events in one. In addition to trying to win outright ‘Scratch Victory’ by recording the highest number of laps, there is also the more hotly contested ‘Handicap ‘Victory’, which in theory could be won by any of the teams.

Each team is credited with a certain number of credit laps, presumed to have been run before the race started. The results are then calculated from the credit laps and the actual laps covered by each team in the six hours to see who has beaten the rest (and the handicapper).

Each of us headed out on the circuit from 9:00 o’clock to do our qualifying, each driver were out for 15 mins and set some good lap times which meant we would start the race from the 7th row of the grid. 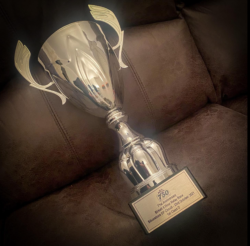 With the green light set to start the race at 11:45, I made my way round to the start line to have the honour of starting the race. The lights went out and a long race was underway, I made a good start and slowly gained some positions during my 55-minute stint in the car. It was then time to come into the pits and release Bryan out to carry on from where I left off.

Bryan also managed to stay out on the circuit for about 55 minutes before he needed to come in to refuel and get ready for his next stint out on track.

Next up on the track was Russ in his BMW E46 compact. His car was able to do the longest time out on track for us with a very respectable 1.40.

By this point in the race, our overall positions in the scratch race and in the handicap were started to look very promising for a good finish.

Bryan and I went out again in the same order as the start of the race, again both managing 55 minutes before low fuel levels made us come back in.

There were now a lot of maths and calculations happening behind the senses by Matty Evans (on the lid of a box of heros) to try and predict the lap times of the other teams at the top end of the handicap race to make sure we were still in with a fighting chance of some silverware.

The call was made to send me back out for a quick 15/20 minute stint to hopefully keep the lead that we had opened up at the start of the race.

I pulled back into the pits to hand over to Russ so he could take the chequered flag, which I had done the previous time we competed in this event. 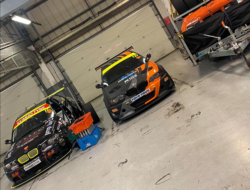 It was now the tense time of waiting for the official results to be released to see if it had been a good race for all involved…..

I would also like to pay special thanks to everyone involved during the day that keep the team running and achieving the results we did. Lucy, Jamie, George, Kai, John, Jake and Matty Evans

Check out this video from Revs Unlimited taken from Donnington Park to meet Paul, see the car and see both in action!